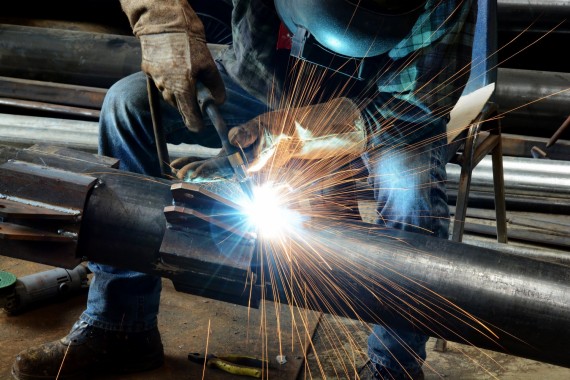 There are a variety of jobs where metals need to be welded together to make a variety of different products from shipbuilding, to automobiles to buildings. Welding is a career where the demand outweighs qualified candidates.

When people go into welding they have to be ready to work long hours and to be in a profession that can be dangerous to their health and to their wellbeing at times. However, it is also a job that pays well and regularly.

Welding is skilled trade and the better the welder the more money they can make. According to the 2008-2009 Occupational Outlook Handbook an average welder’s salary can be anywhere from $10 an hour to $25.44 an hour depending on where they work and their skill levels.

Usually, these salaries are for those people who operate the machines like welders, brazers or solderers. Welders also belong to unions (some of them) which would possibly make their wages a bit higher. Also, an apprenticeship in some cases may make welding wages lower or higher, depending on experience and what they do.

The top wage earner categories annually for welding seems to be electric power ($51,640) both transmission and generation, Federal branches ($49, 600) and pipeline transportation ($47,890). These earnings were current to 2007 and were found through a survey by the Occupational Employment and Wages office.

There are other factors that can make welding salaries higher. Some of these factors include certifications, specialties and the ability to do more than one type of welding. As an example, an individual who has a current commercial diving certificate, has the qualities of endurance and has dexterity that is above what people generally have, could become an underwater welder and earn between $20,000 and $100,000 a year, depending on their experience and set of skills.

According to a Wall Street Journal article, there is more demand for welders than there are welders to fit the jobs, especially when they have an education . The reason is because there has been a resurgence of the need for welders especially in the manufacturing trades. Also, there are a new group of welders who realize that although the job can be a dirty and dangerous one, a person who is willing to work can make a decent living.

As an example, this articles states that an individual graduate of a university who completed a 4-year welding degree, was offered a job just before graduation of $55,500 annually, and they would pay for his relocation and also give him a bonus for signing of $2,500.

Another reason why welders are currently in demand is because many are retiring. The article states that most welders are around 54 years old and will eventually leave the trade.

Welders typically work 60 or 70 hours a week which means they will get overtime pay and there may be bonuses along the way. Someone who has experience and is highly skilled in this trade can make about $60,000 per year. When you add dangerous situations like oil rigs on the ocean or out of the way places, a welder can receive more than $100,000 in welding wages.